My City is contrast, stridency and nostalgia. This series –which begins in April 2017–  gathers the way in which its author, Desbel Álvarez, perceives and feels the city he lives in: Havana, a city that is a little more than 500 years old, since its foundation in the distant 1519. Desbel’s gaze focuses on its buildings, especially those conceived during the 20th century. But this gaze moves away from the days of inaugurations and architectural splendor.

On the contrary, My City is a dystopian journey through some of Havana’s streets, focusing mainly on emblematic facades. At first glance, it might seem like a well-deserved tribute to such important symbols, and in a way it is; but as we delve into the details –not very hidden– we find inescapable signs of the impeccable passage of time. And it is precisely time what these walls write, pillars of stories that seep from their foundations and, a century later, constitute open books, chapters on past and present, yet to be written.

All the visuals contribute to the old substratum of the compositions, they possess that appearance of sepia photographs. Colographic matrices, reads the caption. It is true, Desbel is an engraver and as such, he boasts of a careful drawing and great interest in detail. Now he exhibits the matrix, an important part of that process, he has appropriated the technique, restructured his modus to express his new poetics. He also uses all kinds of materials he finds in his path, wastes to which he gives a renewed, useful life: wood, cardboard and other construction materials, as well as earth and other natural elements. He builds his city from the factual, the streets he walks, the spaces he inhabits; as if it were a duality of realities.

In his walk, Desbel is based at kilometer zero of the Cuban highways, the Capitol –inaugurated on May 20, 1929 and restored since 2010– brags on this occasion countless graffiti, broken windows and closed doors. Little is left of the recently unveiled golden dome and, of course, of all the splendor of this neoclassical colossus, emblem and pride of Havana. The perspective is another aspect to point out; it is not the typical frontal view of the building, as captured by many of the picturesque and improvised cameras that run just in front of its staircase; but Desbel is placed from a profile, giving the feeling of someone who has walked along Prado, the sea behind him, and finally meets the end and beginning of all the roads of the island.

A few meters away survives one of the jewels of Art Deco in Cuba, the Bacardi building, completed in 1930, was once the tallest building in the country, it is still today space for different business offices. It is possible to feel from the matrix, practically monochromatic, the play of tones, the slender lines that lead the gaze to the top where the bat still dwells, emblem of a family that bequeathed culture and tradition to our people. However, it is the attempt of a construction that collapses like pieces of a house of cards.

Three renowned and prestigious hotels make up the group: National (1930), Riviera (1957) and Habana Libre (1958), which overlook from three points in Vedado. When you think of Havana hotels, they top the list. Now, by the hand of this author, they display a visuality of decadence and misfortune. It seems as if they could decompose at any moment, that the wood could come loose and undo their structure.

The houses, another architectural typology addressed by the artist. Among them stands out the Focsa, a building completed in 1956. A true pride of Cuban engineering, at the time it was built it was the second tallest concrete building in the world, after the Martinelli Building in Sao Paulo. Those who walk through it experience pleasure, feel the sea breeze leading them through its corridors, because its construction makes careful use of natural lighting and ventilation. Here, in My City, the construction is consumed from the base, like the slow pace of an invisible fire. Little is left of its erect figure. With it disappears the symbol of an entire city concentrated in a single building, as expressed by its structure: 373 apartments, garages, supermarket, stores, restaurants, etc.; the concept of a small autonomous city, inspired by the ideas of Le Corbusier. Virtually turned into ashes, it seems to scream, but it lets out a muffled moan that vanishes like smoke.

Two other pieces break with the figurative portrait of the buildings. A table and a stool represent metaphors of the whole city. Deteriorating facades, none in particular is recognizable, it could be any of them: windows, doors, eaves, columns…, a panorama of devastation that invites us to know what is behind them, what they keep inside and how they inhabit; the prognosis is not encouraging.

Alvarez, not content with the spotless walls of the gallery, prefers to take his works outdoors, to his natural space, and places them on the surfaces from which he draws his inspiration: corroded walls, piles of garbage, cornered waste… From there, ready to be photographed, the dystopia does not seem so unreal.

My City is a reconstruction of the city, a city that moves and ages, and where time and the status quo show their power. Its author puts in crisis the possibility of transcendence and permanence of the human being; the way he has told his story through immortal assumptions. He occupies a place among urban landscape artists. He maps his walk on any given day and announces an attitude, his critical and reflective gesture. 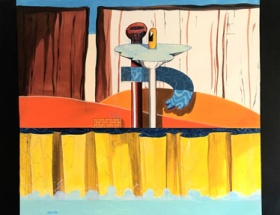 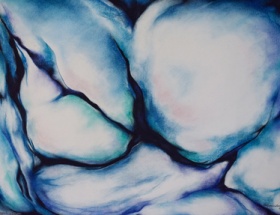