The Shapeless Body, the Degenerate Society

In the midst of the artistic pluralism of postmodernity, Eldy Ortiz Diaz (Havana, 1994) is close to the expressionist tradition in its figurative forms, thus postulating himself as one of the young supporters of what we could refer to as a rebirth or vindication of subjectivism. In doing so, he seeks the poetic-aggressive dimension that allows him this type of images and after a few years of career he has already created a whole autonomous universe of ambiguous and deformed characters –as he describes them in his statement– that populate his work in allusion to the degenerate condition of an entire society.

Eldy portrays man, or whatever he has become, or whatever he has touched and modified by his actions. Man appears in his work as the center of his own actions and his own consequences. Degenerating himself and the environment degenerating around him. He pays attention to the human body, and looks for the psychological value of that body and the emotional dimension it is capable of bearing, in the manner of a  Marlene Dumas. He has more than enough anatomical certainty and plausible description. He accommodates himself to the expressionist vocabulary. This is how the human figure –the wild card– appears in his representations, deformed, twisted, strange, alien, uncomfortable. And Eldy forces us to look at the uncomfortable image, both in his photographs and performances, and in his paintings and drawings (drawings that are not sketches or anything in between, but works in themselves, as he makes clear in his portfolio). And in each of these media  –in which he has found a prolific space for expression, and which he masters very well– he forces us to look at terrible things, perverse forms in which the generic subject seems to have been transformed.

A hand holds someone’s head tightly, so tightly that a sickly green begins to come out of the figure’s face, a putrid black from his mouth, his eyes dull and his neck blacken (Posesión. De la serie: Sujeto omitido) (Possession. From series: Omitted Subject). Another skinny body is on his knees, his face is not visible, he has it tucked into someone’s pants, and his neck has turned blue from the fellatio he has been performing for some time now (Ceguera. De la serie: Sujeto omitido) (Blindness. From the series: Omitted Subject). A creature also appears, lying on a table and a man behind it sticks his finger through one of its eyes as if the membrane were formed by a gelatinous substance, (The birth. From the series: Omitted Subject). And there are figures, vaguely human, falling on their own excrement; uniformed girls whose childish expression disappears from their faces to become monstrous beings; dismembered bodies, gagged, mistreated, discarded, forgotten; there is an impatient crowd cornered at the entrance of the space while a character waits inside carrying a bloody bundle… (Performance and video-projection). All this in his images. And Eldy forces us to look. It binds us all without exception. It incorporates us into the act of violence, even if the experience of violence is alien to us. It forces us to draw from a strange place within each one of us, the commitment to watch. And once placed in front of these terrible things, there is no alternative but to put on the costume of victim or victimizer. I imagine him saying that the horror of violence must be narrated, because violence –violence in all its forms– has become a natural aspect of life and that normality must be taken away from it.

One looks. It must be because the terrible is presented to us in a symbolic key. Because it stereotypes and stages it. Because there is nothing explicit in it. Even when he does everything possible to make the image repulse us, one looks. And in the gaze the metaphor, the Fauvist, violent color, a precious and very vivid color, the figuration sometimes disguised with fanciful, surreal and strange forms come to the fore. One looks at how he composes the image, how he frames it. How well he uses the light, the props, how terribly beautiful the actors look in his photographs. One wonders if they are actors or real characters lent to the performance. One looks. Remembers Kirchner, remembers Kippenberger, remembers again Marlene Dumas. One recalls and compares the tragic worldview of the 20th century expressionists, and how Eldy, like them, also seeks to address the anguished, perverted, degenerate man.

Eldy tells us: My characters don’t narrate anything, they are captive of their thoughts, moods and situations. But he knows well that they narrate. Perhaps not from the anecdotal scene, but from their capacity to symbolize, ponder, criticize, and even to reflect a time and very specific events that, although they are not explicitly represented, can be inferred from the expressive density of the image and the very subtle clues it offers us. Eldy narrates from the represented body and gives this body a great political and social weight. He narrates from the deformation of the figures, from the omission, the destruction, from the assembly of violent and rarefied bodies and spaces. In his work, the represented has that, it holds the tremendous responsibility of a scene where contemporary society looks at itself throwing down its best values, which fall everywhere, scattered. 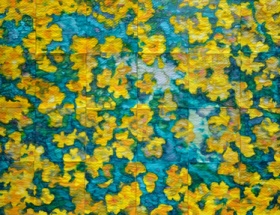