I see myself committed, with a feeling of both pleasure and desire, to write a few lines about Ernesto Gutiérrez Moya, a young and talented Cuban artist. His work, without doubt, is excellent. It is pervaded by a feeling of humility and greatness that competes with the spaces and landscapes that seem to exist only in his impenetrable subjectivity. From there it is possible that a strange sensation of childish balance emerges in the face of the well-known disturbances of the adult world. His canvases could well be considered short chronicles of the same story.

The work of Ernesto Gutiérrez Moya, in its singularity, elaborates the fictional content of his visions beyond any tyrannical submission to contextual reality. The minimalist impulse of his surfaces and the grace of his fresh brushstroke bring him closer to that type of painting that is capable of generating emotion from the most absolute honesty. It is difficult to trace in it the pretension of the arrogant or the impudence of the artisan. On the contrary, it is possible to test the profiles of a subjectivity that is rich in memories and prone to take up again the common places.

His landscapes are articulated through the use of few elements that sketch the final scene, in a quite enviable boasting of synthesis. Among all this it is possible to point out a reiteration, for example, of certain sketches or compositional perspectives in the face of which the artist should perhaps assume a position of alert. In the end, what is at stake here is not to achieve the very purpose of what is represented (fictional or not) as a state of things, but to impose the vital content of each of his brushstrokes.

A certain lyricism wraps his pieces. In fact, when he observed them -attentively and with suspicion- he speculated about the possibility that they could be part of the stage design of any opera or other type of theatrical performance. This generation/construction of “strange spaces” in the limits of reality and utopia has a powerful poetic range and great skill in the determination of suggestions.

There is something of admitted tautology in all this narrative of his, as well as a surprising reference to the fact of not being able to separate one illustration from another, one appearance from another, one surface from another, because they all, as a whole, become fragmented episodes of a single story. This forces us to point out that the line and the color plane of almost tectonic appearance) are the two essential elements in the figures that anticipate Ernesto’s pictorial map. The line and its emphatic ductility display a universe of representation in which the unifying ritual between reality and fiction takes place, as in life; an element that the artist makes good use of to mask his references or “inspiration” motifs.

At the time I stated that the repertoire of pieces constructed by Ernesto become a sort of palimpsest in which childish dreams, on one hand, and the Freudian drive of utopian destiny, on the other, are superimposed. Each plane is a passage of suggestive and insinuating superimpositions and crossings that mix the silhouettes of many cities, strange spaces or possible cartographies. Everything is the result of an invention that turns the artist into a kind of new architect who explores the blank surface with the aim of creating parallel worlds. No critical text is an objective in itself.

The first of those intersections I mentioned above could well be the one written when faced with the impossibility of choosing between the real world and that fable world he has made up. Amid montages, superimpositions and transparencies, a reverse side of subjectivity can be glimpsed that points -from my humble point of view- towards a sensation of loss, a kind of mending and of anxiety for the finding. It is as if, suddenly, these planes were Ariadne’s thread, the mirror in which to reproduce the real map, the hypertrophied DNA scene shared by all of us who are far from our place of origin.

Ernesto’s floods –I could not regard them otherwise– suggest the existence of an clear difficulty to point out, specify, or locate our exact place in the world. Perhaps I do not have the arguments now to develop a more substantial thesis on his work, but the truth is that from a distance I perceive a feeling that leads me to the sphere of purifications and anxieties as well as to a universe of pleasures and reconciliation between the scenarios of the adult world and of that sort of perverse polymorph Peter Pan that we all are in our inner self.

Ernesto is writing his own story, with his accidents or without them, of his transit through the thick, dense and exciting cosmos of painting. I will return before long to venture into another reading, since I most certainly believe, like the artist, that “something strange is going on here”. 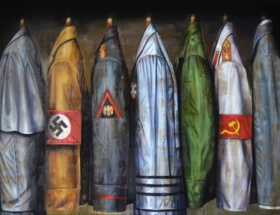 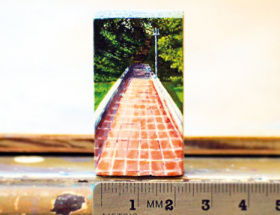 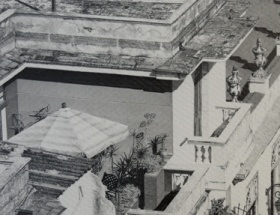