The artist, that producer of visual codes, emerges each time disturbing questions –or demons insisting on coming out– bubble up inside him, projected from dissimilar and often mixed aesthetic languages. Jose Lezama Lima, that master of Latin American and Cuban literature, stated that “Only in art nothing is impossible”. And the fact is that when analyzing that word game we find an absolute truth, because the frontiers of art are diluted in one another and there is room within them for as many codes, concepts, techniques and operations may be generated by the artist.

Considering the above, in my opinion the artistic production of Renelio Marin (Havana, 1964) follows that idea of Lezama. Art offers him the possibility of creating parallel universes that in turn are different in style and technique. But this is a conclusion we will come to at the end of the text. I am just advancing a bit its annunciation. After all, everything is allowed in the universe of art.

And now let us start from the beginning.

Renelio Marin graduated in 1993 from San Alejandro National Academy of Fine Arts and shortly after moved to the United States, but he has continued to share his time between both geographical spaces: his hometown and his place of residence. His production, generally speaking, has been influenced by his context and experience as immigrant in that country.

Marin is an artist trained in the years of the Cuban Revolution, the well-known Special Period and the transfer to a new place whose expectations were interesting in the face of the panorama of sacrifice existing at the end of the last century. Although he was forged as an artist in the academic context of the island, some of his works show an absence of territoriality in his discourse that makes it difficult for us to establish a specific anchorage; it is more like a universal language, useful for any situational analysis. In this regard I refer specifically to works such as Blue Gorilla and the Blue Jungle series.

The first one, Blue Gorilla, places us in the face of a city of apparent visual extravagance, opulent and cosmopolitan like many of the city centers of the so-called First World. He inserts a blue gorilla that observes at a distance with astonishment the immensity of what he has in front of him. This becomes the center of interest, not only because it is in the golden point of the canvas, but because it consciously contrasts with the rest of what surrounds it. In that sense, blue denotes a turning point in semiotic analysis as Blue Gorilla places us in a different line with regard to the bilateral convergence between that context and the primate, which does not yet seem to have found its place in the new territory in front of him. The stormy sky, whose storm is only contained by the artist’s brush, reinforces this dual environment: the city is agitated before the gorilla’s eyes, and the gorilla, robust by nature, is attentive to it.

Precisely, the depersonalization of the figures in his works, or the recurrence to anonymous characters is suspected of being an alter ego of the artist insofar as it is projected as a universal subject, adaptable to the heterogeneous situations that he recreates in each canvas. Let us return here to the Blue Jungle series, large-format paintings in which Marin develops and proposes a loose and brittle line, very close to the caricature projection and the sketch of the drawing.

In Blue Jungle the artist recreates an atmosphere full of characters, crammed to the point that they seem to merge into each other. Here he appeals to an imprecise figuration that at times resembles Kafka estrangements sprinkled with a contained, but indeed visible dripping.

The first ideas of this series resulted from the artist’s master degree in Media, Culture and Communication obtained from New York University in 2011. They appear in a thesis that Renelio developed on the relationship between art and propaganda in totalitarian systems such as those of Nazi Germany and Soviet Russia.

In these large canvases he reflects on the propagandistic manipulation in the field of art, i.e., on an artistic production that from antiquity to the present day continues to spread a manipulative political and ideological message according to the whims of hegemonies and absolute conceptualizations. That is why in his works we find the confluence, mutual understanding and mixture of different characters. It is a kind of campaign that deals with the possibility of coexistence without hierarchies: an agglomeration of popular, not hegemonic stories that can find a place in this wide painting space.

The artist claimed to have conceived this series with an ironic nuance, understanding it as a worldwide time, which would be a variant, according to his whim, of the World Wide Web (www) is. As far as we can see and being participants today in the triple W universe, his Blue Jungle pieces intend to show those agglomerations, in this case humanoids, that popularis in which reason and surrealism, truths and madness, ideologies and intimacies come together.

Renelio Marin’s production is not complacent, neither affirmative nor gratuitous in discourse and aesthetics. He makes use of painting, yes, but he also resorts to the nuance of caricature, to surrealist figuration and to conceptual abstraction. His mutability responds to his inner demons, not to a preference or commitment for a specific aesthetic mode. In his painting –his art– nothing is impossible. He establishes dialogues between opposite realities, unknown characters, diverse aesthetics. He disrupts the frontiers of the “art” universe and grants painting a different comfort zone. Only it is an area where everything is possible. 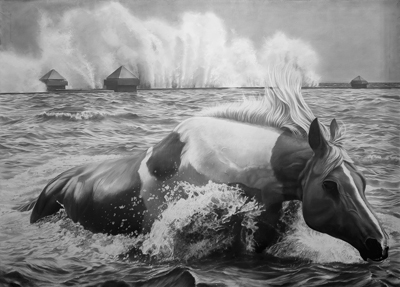 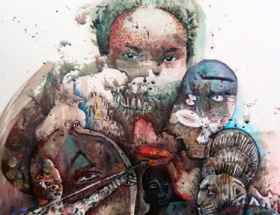 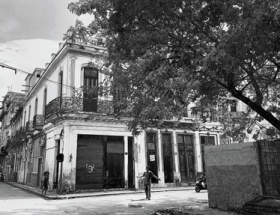