A Man Alone With His Dreams in Tow

Come to the edge, he told them. We can not, we are afraid, they replied.
Come closer to the edge, he repeated. And they came closer.
He pushed them… and they took flight.

Roberto Gonzalez was born in front of the sea in a strategic area of Old Havana, at the exit of the Bay Tunnel where everything converges. He is fortunate enough to see it every day in both calm and stormy weather, which has undoubtedly transcended in his creative attitude. This is evidenced by the works that make up several of his series, mainly Profundo (Deep) and El muro (The Wall), where characters, symbols, signs usually incorporated to his scheme of oneiric representation are reiterated.

In a certain way, the sea has the power of ubiquity in its work, already suggested in the action of the “empirical diver” –the one who enjoys jumping from a considerable height with no greater pretensions than those of reaching the right speed to leave a trail of bubbles in his vertiginous entry into the water–, the wave that when breaking overcomes physical limits, or when this is suppressed in the eyes of the spectator pondering the synthesis of visual language: that is, the economy of resources in masterful compositions that highlight the background/figure relationship and that Roberto, in his training as a graphic designer, dominates as he pleases. The subtlety of the forms is so evident that the backgrounds of an abstract nature, with ochre tones and the use of “sandblasting” manifested in somber environments, are subordinated to them through a harmony that fuses at the same time elements of the system-form, such as balance and contrast.

Havana’s Malecon has been a subject matter covered in Cuban visual arts. Because of its symbolism on a cultural, architectural and historical scale, it captivates painters, photographers, engravers, even practitioners of more modern trends such as installation, digital art, video creation and new media. For many, it is a reference of joy and meditation. Kilometers of sofa that invite them to sit and share with friends, acquaintances or strangers (and why not, also enjoy the immense solitude it provokes). Others consider it as the real and spiritual dividing edge between the interior and the exterior in its insular condition, “the damned circumstance of water everywhere”; in Virgil’s words.

Nevertheless, in its metaphorical sense, The Wall in which the artist delights can cross geographical, political, ideological and imaginary borders. Rather, it invites multiple readings, according to individual/collective creeds and experiences, while paying simple homage to its surroundings. Therein lies the true freedom of art when it conquers the public domain, to suggest and provoke, leaving the meanings open, like any breath of polysemy.

Hence, the subject “wall” –protagonist in this series– acquires sinuous forms as a result of a conceptual sharpness structured from personal experience and the dreams of reason. Sometimes it seems excessively ductile, it twists or ties in a knot, it fragments and due to its own weight it falls to the bottom of the painting, revealing figures that have become universal symbols, objects of everyday use. A line decontextualized from all reality that involves the spectator in favor of stimulating a reflective discourse. The titles given –not at all random– are essential to establish such a dialogue.

If years ago Roberto incorporated in his scenes typical characters taken from the Middle Ages to our postmodern space –among the forerunners off a national artistic movement that emerged at the end of the 20th century–, baptized by Jorge R. Bermudez with the term “post-medieval painting” where the historical and the aesthetic took place at the same time as quotations and appropriations, now comes a solitary being, immersed in different dynamics (perhaps it would be better to say static because of the detailed relevance in the contemplative act of the character) in which we notice the physiognomy of the artist. But the thing is not self-referential, at least not from the simple self-portrait, as he himself warns us. The possible analogy in which he recognizes himself could be implied through a waning quarter moon that appears on the surface of the canvases. Due to its apparent mutism, it becomes the perfect companion for the represented subject, since it turns and moves in its satellite position at the will of the latter, without shining with its own light, but only reflected. Although in its visible face, watchful eye in the middle of the night, we know that it hides another dark side where it keeps secrets. 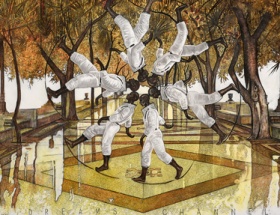 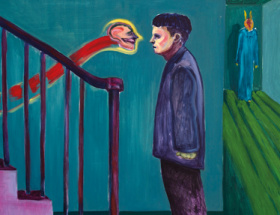 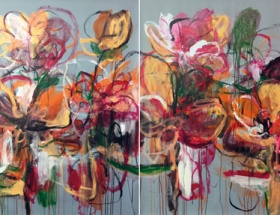