The Existential Drift of Man

The plain is the feeling that makes us great.

Victor Manuel Ojeda’s engines in the realms of contemporary art have been running for a while.  The landscape recreated through painting acquires between 2018 and 2019 when he begins his Maquinaria (Machinery) series such a level of protagonism, or at least of balance with new imagined forms, in an increasingly introspective discourse. In a nutshell, they are spaces made for contemplation, both of the evolutionary and traditional process of the genre.

In this way, those mechanical artifacts coexist with his Lugares vectoriales (Vectorial Places), where the idea of the journey to an undetermined place –by author and spectators–, goes beyond the limits of reality and establishes itself as a motif that dwells in the collective subconscious. Gaston Bachelard proposes to reflect on similar notions in a chapter of The Poetics of Space:

“Immensity is in us. It is attached to a kind of expansion of being that life represses, that prudence stops, but that continues in solitude. As soon as we are immobile, we are elsewhere; we dream of an immense world. Immensity is the movement of the motionless man. Immensity is one of the dynamic characters of the quiet daydream”.1

His canvases alternate complex figures, like labyrinthine spaces designed from the sum of vectors, with spherical shapes in their pure state, although in any case they represent closed structures from which it would be impossible to escape if one is inside or to access from the outside. They have been arranged on rocky areas or while levitating, as if defying gravity, a strategy that the artist prefers to use to conceptually dissociate the abstract/geometric referent (object) from the earthly plane (landscape), which brings us back to a couple of questions outlined in his statement. How much of casual gesture inhabits the subjective? Or then, what laws constitute it? Without pretending to find a priori answers, perhaps related to the sciences or philosophical debates, we can note the presence of novel contributions to landscape architecture, and say like Susan Sontag: “Critical theory has the enormous task of examining in detail the formal function of the subject”.2

In Vectorial Places the landscape reaches its maximum splendor with a preference for wild and open environments. Stones, lakes, distant mountains, great plains are seen with total control of the atmospheric perspective, highlighting in each work an effect of depth. In this sense, our gaze is lost in the horizon, only interrupted at some point in the frame by these objects and their reflections, by the entry of light that inflicts the shadows projected in a perpetual search for spirituality. Saving distances, excellence, styles, here we can breathe glimpses of the peace that the canvases of Tomas Sanchez transmit, now that his name stands out in the international art market, due to the new sales records achieved in Christie’s. In fact, the master’s name continues to be a lighted beacon in the middle of nowhere.

Within the same series, other smaller pieces reveal small details of the ground, composed only of rocks and figures, but perhaps it is the Tierra santa (Holy Land) subseries that best summarizes the concepts of infinity and mysticism that govern these “other” spaces. Huge extensions of arid land, resolved in different shades of deep gray, where man seems never to have passed.

The artist currently explores the supreme point of fragmentation through the univocal study of the skies. He concentrates only on representing with fine brushstrokes the capricious cloudiness where –without being a connoisseur of the subject– I recognize a predominance of “strata”, “nimbus” and “cumulus”, according to the basic categories classified by the Englishman Luke Howard. It should be noted that in these scenarios all logical sense of orientation is lost, that is, we do not know if we are looking at a uniform sky from the front or in contrapposto, although sometimes its crested clouds glowing from the incidence of the sun produce the sensation that they can be crossed, and even touch each other. The illogical thing, Victor Manuel confesses to me, is that he has never flown in an airplane.

Where does so much perfection come from in his palette? I presume it emerges from the soul.

Thus, he deconstructs the landscape in its synthesis: rocks, mountains and shapes. Now also the clouds in their fullness. This is how the whole is conceived through the parts. 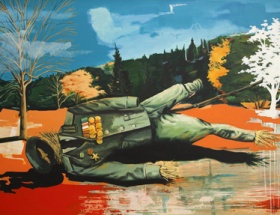 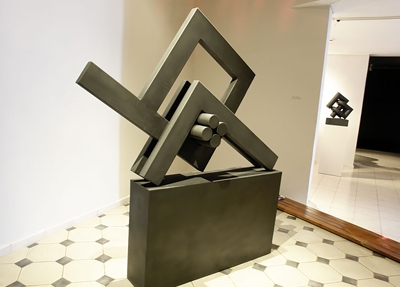 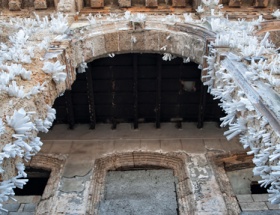