In 1999, Eduardo Lozano held a personal exhibition with the title Vía Crucis (Way of the Cross), at the Gallery 23 and 12, located in the Havana neighborhood of Vedado. Later, in series such as La Caridad del Cobre (The Charity of El Cobre) (1999) and Historias de peregrinos (Pilgrim Stories) (2019), he would modulate a creation that approached the religious theme in a very personal way. In the context of Cuban art, this theme has a strong presence in the creations of artists linked to the generation of the 80’s, among them: Juan Francisco Elso, Jose Bedia or Marta Maria Perez and in artists of the 90’s such as Belkis Ayon, Jose A. Vincech, Eidania Perez or Lourdes Leon. In a general sense, these creators have approached the subject by linking it to the Cuban syncretic cults from very varied perspectives, but Eduardo is one of the few who has made the Christian theme the center of his interest.

Referring to the woodcut series Pilgrim Stories, Eduardo has insisted on the idea that the images he recreates in his pieces are not direct religious representations, they are metamorphosed in his life, stories lived along a journey made by pilgrims, a trajectory from which personal experiences emerge that provide the titles to the works: Descansando en el río (Resting in the River) or La señal en el camino (The Sign on the Road), which within the set, the latter, shows a greater aesthetic load, the lines of that road extend from the figure of the walker to a possible point of arrival, long lines that overflow like a river formed by experiences and events that arise along the route, filling the pilgrims with a special love for all who pass through it, and this simple detail makes the works contained in the series project sweet moments, which are linked under the effort of going from one path to the other, from a night under the weak light that it projects, or in a place that welcomes the walker who arrives unexpectedly. The woodcuts evoke that experience that only pilgrims know, they are acts of faith that flood the works with a human breath.

In a text written by curator and critic Antonio Eligio Tonel, he comments: “…These works do not demand praise, they do not procure admiration: the sensitivity that inspires them, grateful in its melancholy, only requires gratitude in payment…”1

But the entry of the religious theme in the creation of this artist, has different perspectives, in the aforementioned direction this theme transpires a spirituality that is not explained through rituals and religious beliefs, it is a journey that discovers it embedded in paths, trees and rivers, crossed by pilgrims, special travelers in search of the Camino de Santiago (Road to Santiago), a path through which they collect their soul, sigh the air, learning from a devotion that can only be understood by sensing nature.

In another direction he fuses mythological and catholic themes as seen in his painting La caída de Ícaro (The Fall of Icarus) (2017). The Icarus he recreates is a naked angel with white wings , and as it happened to the mythological Icarus falls into the sea, unable to escape his fate.

Another religious appropriation is found in the work El sueño de Jacob (Jacob’s Dream), a biblical theme that inspired the artist to place his character asleep on some stones while dreaming of ascending to heaven by a long staircase wrapped in a blue light.

A third direction, close as on previous occasions to the appropriations of events and images taken from the Catholic religion, but reinterpreted from popular culture, is the series of 19 paintings La última cena (The Last Supper), it begins with a realistic representation of the Catholic myth that dissolves into abstractions as the work progresses, in the end there are only stains of that apparently solemn meeting. It is so in the Catholic tradition, but in Eduardo’s work, we do not know clearly who are those twelve figures that seem to converse, coincide or disagree, an uncomfortable dialogue occurs, which breaks the static and harmony of the original image bringing it to our days to a conversation in which possibly there is no consensus.

The pictorial and xylographic work of this artist is extensive and diverse, he does not stop at the religious theme despite its importance in his work as a whole, his way of approaching Cuban daily life through characters and situations that can be understood by their presence in the imaginary of that life. But this life is very particular, it is the struggle for subsistence in the daily fight through difficulties, the joys, loves and grudges that the days accumulate and Eduardo recreates them through a family riding a bicycle, men and women waiting for a bus at a bus stop, friends on the beach or saying goodbye, are some of the scenes that make up the series. In doing so, he expands the rich anecdotes contained in his works, imbuing them with strength and timeliness, thought up by an artist who, like him, is so immersed in spiritual values.

The appropriative procedure, very common as a constructive resource in contemporary art, serves as a guiding thread through which he appeals both to the Catholic tradition, as well as to the present Cuban and Valencian life, since this city, where he has been living for some years, has also served him as an inspiration.

As Tonel points out in the aforementioned text, Eduardo is a modernist artist, the ethical values and the presence of fine visual constructions of those values make him a particular creator, because he has managed to fuse the modern discourse to a contemporary reading and appropriation procedure, he reads religion, but at the same time he interprets life without forgetting the difficult constructions that surround it, he reproduces it as it is or wraps it in a mystical halo that elevates it. 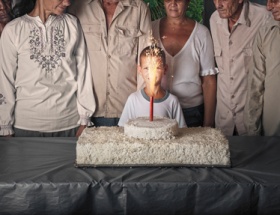 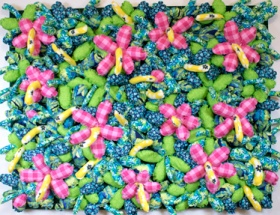 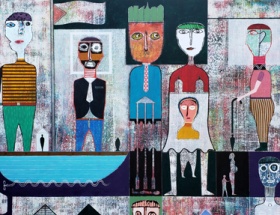