The Existential Drift of Man

They don’t know where they are going, they don’t even know they are on the road. And I approach them and I tell them “keep walking because this is already your path”. Trust, trust, trust…1

The gregarious man, the omnipresent power, the architectural monumentality, the lost massiveness, the constant search for a better and superior state, a gloomy atmosphere, dramatic, with scenographic nuances and textual additions, are some of the constant elements in the work of the artist Gustavo Diaz Sosa, who is based in Madrid.

The great leitmotiv of his career has been the intention of giving answers, in an aesthetic manner, to three main questions that have transcended Humanity: Who are we? Where do we come from? and Where are we going?

From these questions, Gustavo’s work reveals itself as a personal and poetic reflection on the current state of the subject in modern society. His characters are a representation of Humanity as a whole, without faces, without identities, wandering everywhere like sheep in a flock, bewildered within their own perceptions, cornered between walls, stairs and huge bordering spaces. His work becomes a parable about the loss of man’s identity, who seeks to save himself or to survive in this astounding and jaded state without realizing that the path to follow lies within himself, in his inner self, in his essence as a subject.

As above, so below. As within, so without. Search in your inner self…

Gustavo Diaz Sosa’s paintings are a poetic projection of our present and immediate future, in the light of modern times. As blind, disoriented, gregarious and capricious, these little black men wander around without a definite direction. They look like puppets operated by a superior power that forces them to mold themselves to its will, to its immobile structures and its unbreakable laws. Power finds its parallelism in the architectural masses that rise, solid, labyrinthine. The artist presents here a society adrift, anonymous and desperate before the uncertainty that overwhelms it for no longer being aware of itself, for not being able to control its own future, and for letting itself be shaken like a puppet by a superior system, toxic and attentive to keep the flock it subdues at bay (Orphans of Babel Series, 2019). In these pieces there is an atmosphere of emptiness, an overwhelming loneliness that dwarfs even more these anodyne characters. There is a contrast between the sepulchral emptiness of certain shots with the defenseless and minuscule subject that appears and defies the immensity that dominates it. A failed attempt at this confrontation.

Man is miniaturized in front of those large unfinished concrete structures that, seen from a low angle, rise in a monumental way (Wrong Way to Heaven Series, 2019). This reveals an idea of truncated continuity, a frustrated dream of man to pretend to reach God or that divine state that symbolically represents the origin of everything. Once more, failed attempt.

On the other hand, architecture has always carried in its essence the divine language of Creation. Remember that this art rises towards heaven and endures in time. But the grandiloquence of architecture has also been a motive for the domination of the most powerful over the most disadvantaged. This dualism finds its conceptual and semiotic foundation in the work of this artist. The architectural systems to which he refers us present this duality that oscillates between the divine and the imprisoning. The divine as an idea of ascension towards a glorious state. Consider that the contemporary city is built on ideological, political and social foundations that project a vision of growth, elevation and wealth. The entire urban fabric is projected from and towards the ever-increasing search for superiority, always on the rise.

In contrast, the carceral here highlights the vulnerability of today’s subject. The artist disturbs the traditional sense of architecture and city as spaces of harmonious coexistence, to emphasize the uncertainty and fragility of today’s man in the environment in which he develops and relates (Wrong Way to Heaven Series, 2020). It makes us participants of an erratic behavior, of loss and desolation of man with his own environment and with his fellow men. It makes us understand how incommunication, alienation and automatism are imposed, as conditions of apparent naturalness, in a paradoxically hyper-communicated society. These disintegrated little men that we see in Gustavo’s works wander in a sort of existential limbo in search of something beyond their material reach. They channel a tormenting search, in an inverse and outward way, when, in reality, that path should be built inward, towards one’s interior.

There are as many ways to reach the truth as there are souls on Earth, but there is only One Truth…

Certainly, Gustavo Diaz Sosa’s work has matured as well as he, as an artist, has also grown. His work has gone through several processes of technical and conceptual maturation; and in it we can notice a high autobiographical dose, full of his own reflections overturned on the support. In his initial works, architecture is the protagonist within the composition, with a very particular interest in temples and classical ruins, and in closed spaces without representation of human figures. Later, he evolved towards a stage in which the human mass began to gain relevance. In these works a very marked social connotation is felt, the autobiographical condition becomes powerful and certain satirical and reflective nuances are added, resulting in a more closed metaphysical painting (Of Bureaucrats and Godfathers Series, 2016).

In this process of maturation, the artist has gone beyond the representation of compact architectural structures, to open up towards compositional spatiality. Now, he contrasts interiors and exteriors in which the subject continues to be stunned in that astonished walk and proposes works that reach a stage of greater existential strength (As Above, so Below Series, 2018). A philosophical and mystic background is noticed, which reveals, each time, that great leitmotiv that moves Gustavo’s work. But, the truth is that there are no easy or quick answers to explain: Who are we? Where do we come from? What do we aspire to? Why and for what purpose do we exist?… However, it is necessary to formulate answers, be them right or wrong, because it is the only way that people in today’s society –liquid society as classified by Zygmunt Bauman; Orwellian as in George Orwell’s novel 1984; or hypermodern society with a loss of historical consciousness as defined by Gilles Lipovetsky–, will continue to seek the path of truth.

There are several ways to reach the true light…

Undoubtedly, Gustavo Diaz Sosa’s work leaves no room for indifference. And this is also influenced by the particular technical ritual he develops. He is an artist who enjoys an uneven self-assured, and conscious painting. He conceives canvas as one more sketch of those he keeps in his workbooks, but on a larger scale. He pastes paper on the canvas, works on layers that he creates without a closed technical script, applies concentrated dyes, industrial materials, uses charcoals… until he achieves a ruinous aesthetic, with ochre tones like an old and worn-out drawing that has already become a sort of his very peculiar plastic signature.

The work comes to life and strength spontaneously. Gustavo pours on it, as an artistic injection, that need to translate thoughts and concerns where the existential torment of the subject is the backbone of his discourse. Hence that harmonic and nervous dialogue between drawing and stain that results in a symbolic reverberation full of his own and inherited references, such as the tower of Babel, the Trojan horse, the totalitarianism of the universal powers, the myth of the origin of everything and of God as a superior divine force, Kafka, Dante, Anselm Kiefer, the supposed “disappearance of man” professed by Foucault, and many more references that swarm within his works. In addition to all this, there are writings that round out the scenographic and dramatic environments. Words or phrases are also part of his artistic exercise, not as a gratuitous addition, but as a response to his need to transport to the canvas, in a scriptural way, other perceptions, analysis, ideas that arise suddenly during the creative process.

Gustavo Diaz Sosa challenges us with a work of art which is as sublime as disturbing. With it, he removes all complacent vision of reality to remind us that we have forgotten our origin, our existential purpose, our vital identity. His art is the manifestation of the intangible in the tangible (Statement of the artist); is his poetic interpretation of the subject’s journey towards a path of awakening and liberation in this contemporary society. In the artist’s own words: it is the representation of a “neo-rebirth” of Humanity, considering this as possible, from an optimistic point of view. Each of his works is a thought expressed in ink and charcoal that is presented to us as the starting point for new reflections and looks at the anxieties that continue to afflict the subject today. Each of his works is a judgment on our imperious reality that is reinforced in those punctilious and key phrases. His work generates more consternation than relief, provokes more anxiety than joy, raises more questions than answers. He does, however, offer us, from art, a way to continue searching for the supposed truths about: Who are we? Where do we come from? and Where are we headed?

And if you have understood this message, then you are on the right track… 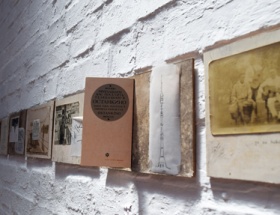 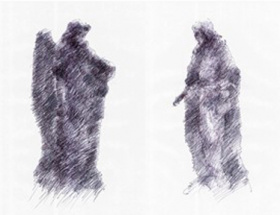