Espacios Complementarios (Complementary Spaces), title of the series of canvases belonging to the work of Alberto Domínguez (Matanzas, 1989) is an euphemism. These stories-documents are not collateral. Following Marxist logic, what the artist presents us with are spaces from which what is classified in philosophy as the State’s ideological apparatus are put into practice and constructed (1). Therefore, it is the power centers that define the core of the artist’s incisions, or at least, the centers that produce the thoughts to build the nations ideological identity.

Taking this for granted, let us analyze the dissimilar aspects allowed by interpretation. The first element of this canvas series are the architectural spaces in disuse, even in ruins. This sign immediately recalls the romantic artist, and regardless of how cynical and rational the work, the artist’s attitude is still that of a nineteenth-century intellectual who dreams of the promise of a better world while disdaining illusion with the wink of disenchantment.

Beneath the rational methodology with which this universe of images is constructed is a great deal of inquisitiveness, since one of the obsessions that evidently control artistic thought is the understanding of the behavior forms as a nation. This process of understanding has its expression in the compilation of study objects –all having become works– for the series Espacios…: Tribuna, Pan-American Stadium, Genetics, Juraguá… constructions of the revolutionary period as part of an economic, political and social development program. They respond to different stages of recent history and present particular anecdotes and projects of what we conceived for the future and how we understood ourselves. Each of these “objects” involves a field from which they are questioned for the aesthetic exercise, and for which they are dismantled or deconstructed, which involves their consequent particular projection. The collection of meanings of these constructions is the confirmation of the incomplete promise, despite having turned the project idea into an achieved construction. What interests the artist is to emphasize on the presence of these ideological promises whose existence ceased (when they became unfulfilled programs), evidence of the mismatch between commitment and reality. These architectural landscape-objects establish the destiny of the dislocation, the breach and the error. They separate the promising dream from a future in progress. Alberto Domínguez questions one by one the subjective meanings present in the ideological discourse in relation to these buildings, which in turn exhibit the unfinished nature of the projects.

The spectator assumes a suspicious position in the face of the measured disposition to the clean cut and rationality of the creative method (let us recall that the artist’s exercise implies a moderating action, just as ideological apparatuses do). In the attempt to dominate reality, the artist succumbs to the same effect that he insinuates: the delay of the ideological discourse that he questions, indicated at the base of his painting method, which is in itself a de-painting method. These canvases are made with the washing technique, which is not exactly what they are. They resemble the romantic theme and it is not landscape in its most exact definition, and they pretend to be the games of post-painting abstraction although they cannot be defined as such either. Let us then remain with post-painting (2), since their technical methodology is a metaphor of the discursive attitude: they de-paint just as they de-ideologize the spaces they refer to.

If the image represents an architectural spatial structure that integrates as part of its social role the individual’s environment in society, and insofar as it also determines a way of thinking, this image is “constructed” from addition by elimination, in an attitude that is similar to the washing technique of washing and to the intellectual exercise of interest for the artist. The spaces are drawn and sketched on the canvas, layers of paint are given, the spaces are preserved and not preserved, acrylic paint is “washed”, chance is controlled and not controlled; and after all the processes of juxtaposing and removal and having established an image by accumulations of remains, the image is finally “groomed”, it becomes festive with the abstract reference that relates the show, the appearance that connects the baroque, party-like shouting. Pure decoration and surface.

This series deals with the methodology for the construction of meaning rather than with the result as objective. The objective is not what we see in front of the finished canvas, since the work itself is the process that results from the metaphor of creating an ideology, and almost like an irony or a syllogism it strives  “not to be” painting, just as the architectural objects of reference are not what was expected of them. The end, in the end, is the dressing that strives to please, the surface: the wallpaper that resembles the letters of the printed discourse. It thus makes the social and political discourse relative in the field of art, and deprives it of ideology in favor of its completion through the otherness, because as an ideology, the concept of art is also established in the ideas, and is opposed to it in order to be diluted in the aesthetic thought about the nation.

Espacios Complementarios subverts the system of ideas, paving the way for another alternative ideology, also contained within the very ideological apparatus it confronts. From the unfinished it contributes to satisfy the concrete identity of what we are and highlights what we are not. It links processes and methods in the cynical encounter of rationality and carnival pomp. It is in the intensity of this encounter where it makes us aware of the sensitive drama of our reality, perceived in the fatuousness of the ideologies, and establishes a logic as irrefutable as the facts that also becomes dramatic, boisterous and painful. Spaces… therefore, are hardly complementary, but rather essential, cardinal, and necessary to see in spite of the wall paper and the siren song. 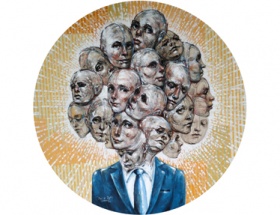 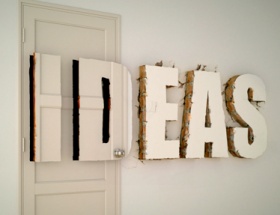 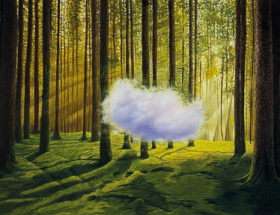